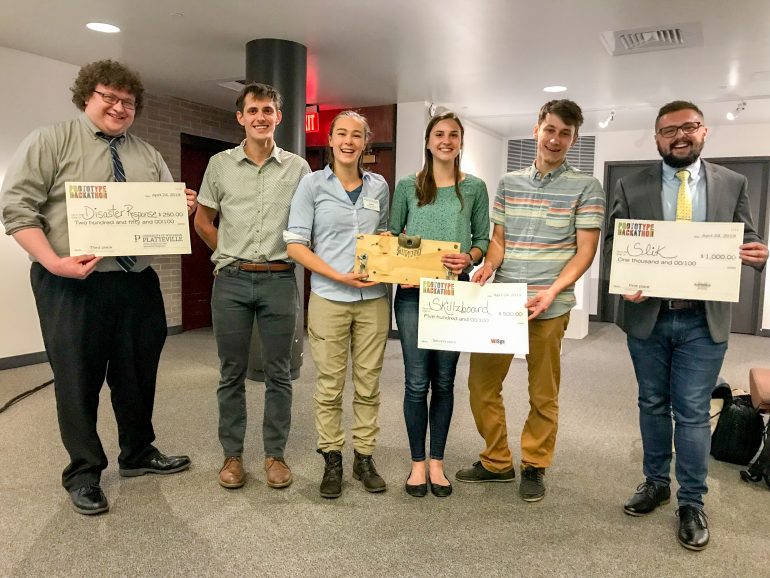 Eight teams participated in the event and had two designated days to design and build a prototype in late March. They presented refined prototypes to a panel of judges on April 24. The teams were judged based on functionality, market need and overall presentation.

WiSys President Arjun Sanga, who attended the presentations, said he was impressed by the growth of the Prototype Hackathon at UW-Platteville in its fourth year.

“You could see the improvement over the four years in the quality of the ideas and the excellence of the pitches,” Sanga said. “Congratulations to the winners as well as all of the participants for a high-quality competition.”

Prochaska’s winning project, called “Slik,” allows customers to use a mobile app to schedule an oil change for one or more of their vehicles—wherever those vehicles are parked—and arrange for an “oil change expert” (a contractor, not an employee) to perform the service.

“Taking your vehicle in for a routine oil change takes valuable time out of your day. You could be waiting for hours for them to finish. Not to mention, it can be expensive in large cities,” Prochaska said in his participant profile.

During the hackathon, Prochaska worked to develop a prototype of the mobile app for Slik, along with teammates Jayden Prochaska and Quinn Jaworski.

“In today's market, mobile apps are absolutely necessary for success and will be a large part of what makes Slik successful,” Prochaska noted.

The first place prize was sponsored by the Platteville Regional Chamber.

The team worked to make a prototype that would ease the transition from indoor to outdoor rock climbing.

“Many rock climbers making the transition from an indoor gym to outdoor climbing lack the necessary skills to safely ascend and descend a route. Teaching these skills can be both difficult and unsafe to do from the ground. Climbing gyms need a reliable way to demonstrate this process in order to help prevent accidents,” according to the team.

The team’s finished prototype to address the problem was named “Skillzboard.”

“As technology improves, the ability for an immediate and effective response becomes more of a possibility. An ideal disaster management system would be able to react immediately to any situation and even predict and counteract disastrous events. This can be made possible by implementing advanced control techniques and applying them to the continuous management of disasters,” Wagner said.

The prototype was a preliminary machine-learning based, visual and sensory collection and processing system capable of controlling multi-agent systems to detect, assign, and complete objectives.

WiSys is a nonprofit organization that works with faculty, staff, students, and alumni of the UW System to facilitate cutting-edge research programs, develop and commercialize discoveries, and foster a spirit of innovative and entrepreneurial thinking across the state.