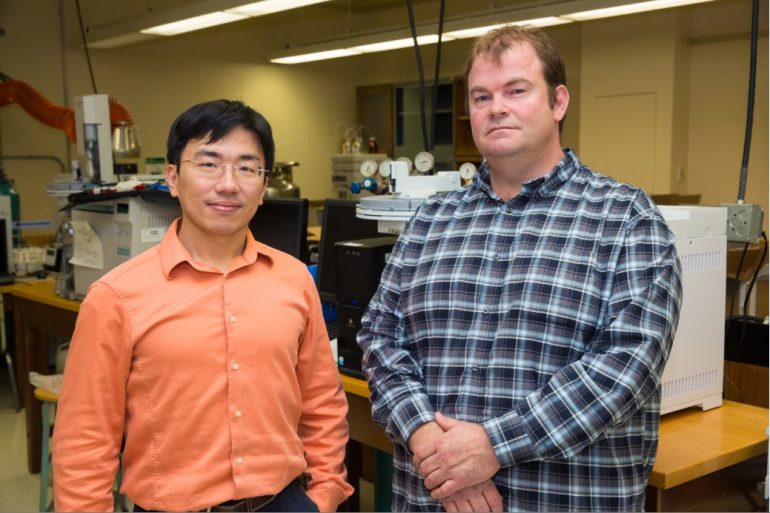 Color tests have long provided law enforcement with an effective way to screen suspected illicit drugs when they are encountered in the field. However, existing tests for known scheduled compounds have their limitations and there are currently no tests available for detection of emergent drugs. Drs. Joseph Wu and Chuck Cornett of UW-Platteville have undertaken research to address this current market need and have developed prototype tests for the colorimetric detection of synthetic cathinones and cocaine.

The technology developed by Wu and Cornett is exceptional due to its high specificity and accuracy when testing for both well documented and emergent drug species, and both researchers are interested in building off these initial discoveries to continue developing tests for additional compounds and emergent drugs.

The researchers are excited about moving technologies into this field and helping law enforcement be as effective as possible upholding the law. Both men see this technology and future developments in a similar realm as great ways to get involved and make a difference.

In addition to their general curiosity about the subject, Joseph has a general interest in environmental chemistry due to health concerns of his son, who has to take daily anti-histamines due to an allergy. Both men also saw the potential in the current colorimetric test market as a project for students to collaborate on and work with in the classroom.

Throughout the process, they have learned that it can be a difficult task to commercialize a new technology. However, both men agreed that the excitement of following the project from a simple idea to an Intellectual Property filing has far outweighed any difficulties, and that seeing the product take shape has been extremely rewarding.