How did a UW-Whitewater professor develop a new physics education tool? 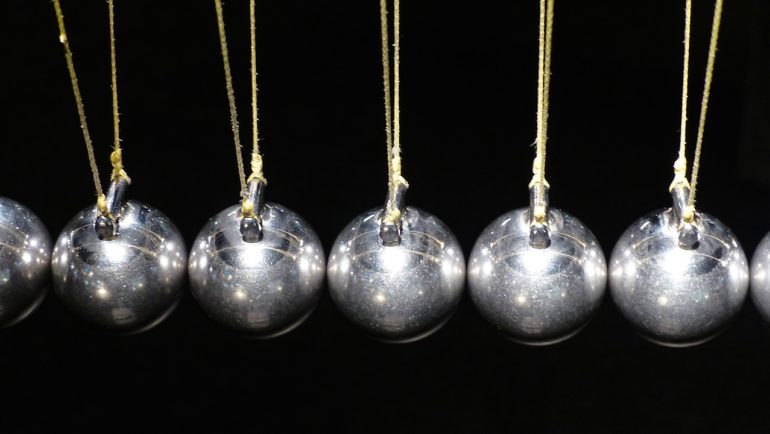 Ozgur Yavuzcetin, an assistant professor of physics at UW-Whitewater, has set out to redirect the purpose of the recognizable Newton’s Cradle.

Instead of acting as a desk accessory, Yavuzcetin has extended its practicality and invented a modified Newton’s Cradle for use as an educational tool to help students comprehend mechanical impedance.

Currently, the device can demonstrate the principles of momentum and the conservation of energy. The user pulls back one metal sphere to the starting position to impact the row of spheres and transfer the momentum through them to send the final metal sphere up to the same distance as the initial starting position on the opposite side.

Now, Yavuzcetin has added an additional learning element to the practice. With this new device, the user is able to replace the metal spheres with varying masses, allowing the user to create unique cradles for numerous experiments.

This new and improved device will also enhance the understanding of the previous principles mentioned by showing the effects of mechanical impedance and its impact on these concepts.

The inspiration for this invention was sparked by “total coincidence,” says Yavuzcetin, from a combination of teaching and watching TV commercials. “I realized that something like I had invented, did not exist. So I feel like it needs to be done,” Yavuzcetin said.

Yavuzcetin is not a first-time inventor. He has held patents in the past and carried some experience going into the process. Yet, he is especially thankful to WiSys for “not only patent support, but also the support with commercialization,” Yavuzcetin said.

WiSys is seeking to create a partnership between Yavuzcetin and possible vendors to develop the product further.

Yavuzcetin is eager to continue using his invention in his classes, as well as train colleagues to use the device. “This way,” Yavuzcetin said, “the product can be tested and gain a higher potential as a teaching tool,” which was the ultimate goal throughout the entire process.

As for future invention disclosures, Yavuzcetin said he “will not hesitate to contact WiSys first.”

Get your research off the ground with 2023 WiSys Spark Grants